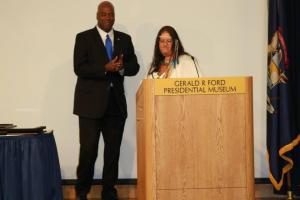 The President of the United Confederation of Taino People, Dr. Roberto Mukaro Borrero receives the Golden Rule International Award from the Director of the North American Division of the Interfaith Peace Building Initiative to the United Nations in New York and African Union.

Kasike (Chief) Mukaro received this prestigious international award for standing up for the Taino Nation when the world systems said the Taino people did not exist anymore. He fought to keep his nation recognized as a legitimate people group. The United States Census now recognizes the Taino people.

Ambassador Clyde Rivers is quoted by saying, “It was an act of valor for President Borrero to put his people back on the map of the world. This is truly the Golden Rule in motion. It is a great honor to have President Roberto Mukaro Borrero as a Good Will Ambassador for the Golden Rule worldwide.”